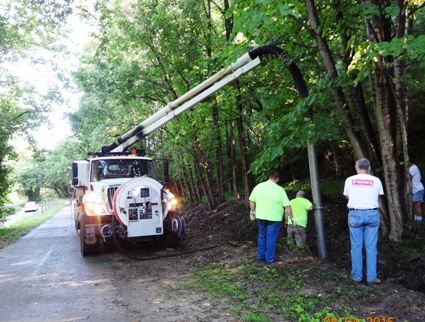 Bruce Cortright and Mike Dresch may not be real detectives, but they play them on the trail.

The crime scene: a section of trail north of Loveland’s Nisbet Park that is wet or icy much of the year, posing a safety hazard to trail users.

The suspect: an old drainage ditch and culvert, clogged long ago and now in hiding. 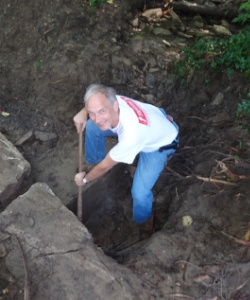 The investigation: Dave Diersing and Mike Egan lead a group of FLMSP volunteers who work several weeks clearing brush from the non-river side of the trail north of Loveland, starting at Cones Road and stretching 1/3rd of a mile north. To unsuspecting trail users, they have beautified the area; the real reason is to allow a backhoe to enter.

Bruce Cortright and Mike Dresch go to work recreating the missing drainage ditch, and their digging pays off as they uncover the hidden culvert pipe! However, they cannot apprehend the suspect because it is almost completely clogged with sediment, rocks and tree roots up to 3 inches in diameter. They call for reinforcements.

Brian Bailey and John Kendrick of Warren County Water & Sewer come to the rescue on August 4 with their behemoth jetter truck which has helped in the past with trail culvert clearing. The tree roots, however, were a new problem; the crew had no equipment to cut the roots and they were leery of getting their jetter device stuck in them. They were limited to high-pressure hosing of the culvert’s inlet and outlet, which removed lots of mud and rocks.

The verdict: After a 3-hour effort by the Warren County crew, the criminal culvert is successfully rehabilitated. Although it is still partially blocked, it is open enough to allow lots of water to flow through it.

Thanks to the efforts of our Warren County and FLMSP crime team, the area is now dry and safe for citizens on the trail. 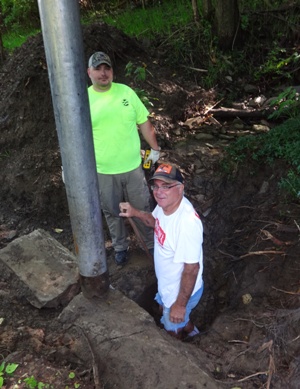 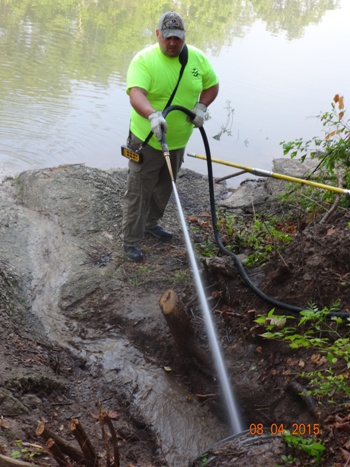