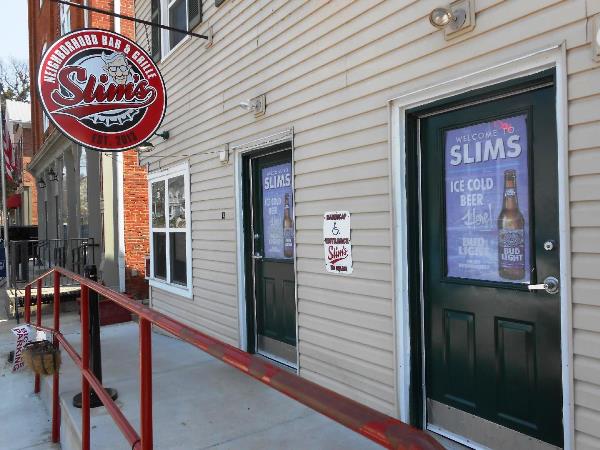 Totally committed to seeing their trail restaurant quest to its geographical conclusion in the “far north,” the TTA, augmented by Rich Easterly, made its 24th stop on April 18 at Slim’s Neighborhood Bar and Grille in Spring Valley.  Slim’s is widely regarded by the locals as “the best restaurant in town.” Probably because it is also (to the best of TTA’s knowledge) the only restaurant in town.  Half the space is a bar with only two beers on draft (both “Lite,” though numerous “real” beers are available in bottles and cans). The other half of the building is devoted to the dining area.  Located about 50 yards from the trail, Slim’s is an unpretentious neighborhood bar and grill well patronized by local folks, as immediately noted by the “foreign” TTA personnel who arrived there shortly after noon.  The locals were perceptive diners: ALL the dishes sampled by the TTA were delightful!

As might be expected from a neighborhood restaurant, Slim’s has a broad menu which begins with breakfast dishes (served until 11 am) and goes on to include standards such as pizzas, wings, kids’ items, soups/salads, burgers, and then dinner specials.  We were intrigued by the whimsical comments on the menu and website, such as:

Noticing that all the burgers (in 4, 8 and 16 oz. iterations) come from a local market, everyone in our group opted for some variation on that theme.  A variety of included sides were available.  John went for an 8 oz. Pizza Burger topped with bacon, ham and jalapeños, with fries, for $10.29.  Rod chose an 8 oz. Slim Burger with Swiss cheese and fries for $8.99.  Rich took a 4 oz. Mushroom Swiss burger with onion rings for $7.29.  George ordered a 4 oz. patty melt with grilled onions and Swiss cheese with onion rings, also $7.29.  Everyone was eminently satisfied with their burgers.  John asked for his fries well done, but got them pretty much standard (see above comment regarding “Order what you like . . .")  All four diners agreed that the breaded onion rings were some of the best each of us had ever had anywhere, and ALL the burgers were exceptionally tasty.

Overall, three of our party voted for FIVE bells for Slim’s.  George, ever the picky curmudgeon, felt four was adequate, but finally folded in light of the overwhelming pressure.  So Slim’s joins very rare company and gets FIVE bells from TTA! 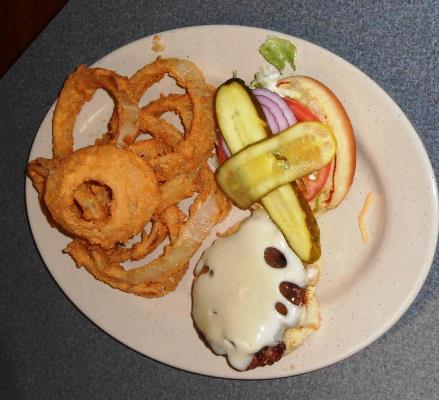