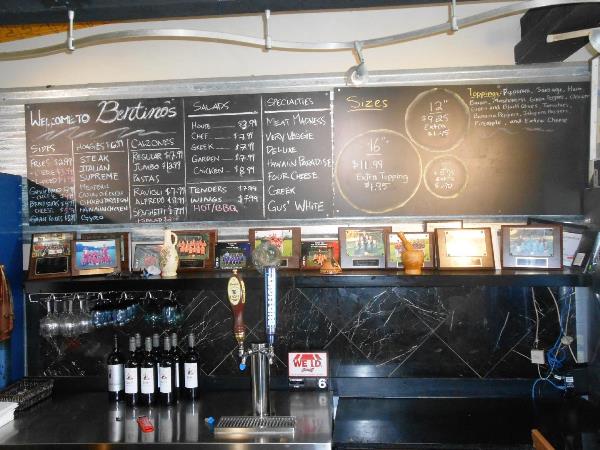 Four inches of snow topping a treacherous layer of ice did not keep the hard-core (but unsupported) TTA Trio from its appointed rounds on February 7. They continued their relentless northern march up Waynesville’s Main Street to Bentino's Pizza, a little storefront establishment perched almost on the curb at 140 S. Main. A compact and unpretentious little Italian-themed restaurant, Bentino’s offers reasonably priced appetizers, salads, calzones, pizzas, pastas and hoagies/gyros in a snug dining area perhaps 25-by-20 feet. Soft drinks, wines and beers are served at a small bar in one corner which doubles as the order-taking area (there is no table service). Bud Light and Yuengling are available on draft, and a small but reasonable selection of bottled beers is also offered. 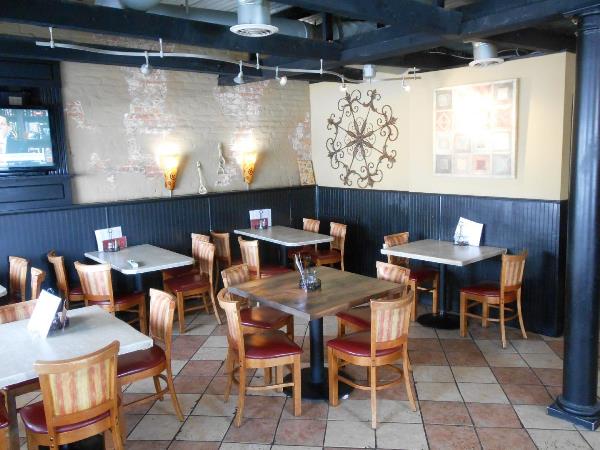 For its lunch patrons, Bentino’s had but one person running the whole show; just one man was the combined order taker/bartender/chef/server/cashier. That seemed odd, at least until the TTA Trio realized that in the time they were there, they saw only one other customer and that was just for a takeout order. Overall, service was excellent, though a total of only four customers in a span of well over an hour certainly wasn’t about to put a strain on anyone. Parking was readily available on the street (and supposedly also in a small lot in the rear), but if there was anywhere to safely park bikes, we missed it. 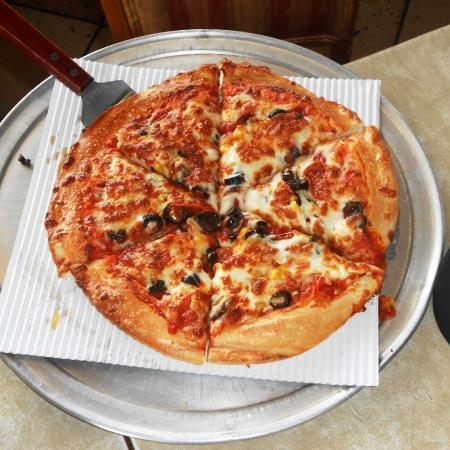 Bentino’s offers seven different house specialty pizzas priced at $8.99 (small 8”), $14.99 (medium 12”) and $19.99 (large 16”). Create Your Own pizzas go for $5.95 (plus $0.90/topping); $9.25 (plus $1.45/topping); and $11.99 (plus $1.95/topping). All the calzones and gyros are $6.99 and come with chips. John selected a specialty Meat Madness medium pizza (topped with a wide variety of meats) for the listed price of $14.99. Rod ordered a medium Create Your Own with pepperoni, banana peppers and black olives, which set him back $13.60. George’s small Create Your Own came with double pepperoni, sausage, black olives and onions for a total of $10.45. Neither John nor Rod was able to finish his pizza. John accompanied his pizza with a pair of Bud Light drafts. Rod began with a bottle of Great Lakes Christmas Ale, and then switched to Stella Artois. George stayed true to his craft beer commitments and stuck with a pair of Christmas Ales. Everyone was quite satisfied with their food, and there was a consensus that Bentino’s interesting technique of putting a mozzarella or provolone mixture of cheese atop each pizza before baking yielded a unique and delightfully crisp layer of browned cheese upon serving.

While all members of the TTA Trio were basically happy with their food, there nevertheless was consensus that trail users would be unlikely to return to Bentino's; essentially, the food was “acceptable, but not memorable” and access from the trail was not worth the extra effort for the product. Accordingly, Bentino’s was rated at 2.5 bells. 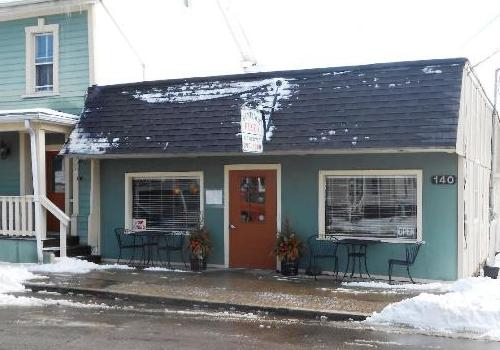