On November 1 the Taste of the Trail Duo -- aided and abetted by co-conspirators Bruce Lathrup, Rod Gossett, Mike Egan and Don Hahn -- convened for lunch at central Loveland's big venue restaurant, The Works.

Sited atop an upslope, and fronted by an extensive parking lot (which, nevertheless, is often filled to overflowing), The Works directly overlooks the bike trail from a distance of perhaps 150 yards.  Bike racks are conveniently located adjacent to the restaurant's entrance.  Built in 1905 as a water filling station for steam locomotives, with later incarnations as a firehouse and public works facility (thus the name), the structure has been elegantly re-purposed as a charmingly rustic (think exposed brick walls) eatery with large garage doors in front which can be opened in fair weather to join the interior spaces with an extensive patio.  Patron capacity has been expanded via addition of a classic railroad dining car located at right angles to the north end of the building -- but even with that, don't be surprised if there's a wait for seating on beautiful summer weekend afternoons; The Works consistently is an extremely popular dining destination along the trail.

While a multi-page menu is offered, The Works' unquestioned "strong suit" is a wide variety of pizzas from their brick oven (see photo). For those who prefer something other than pizza, choices include a broad range of appetizers, salads, soups, sandwiches, pasta dishes, desserts—as well as a selection of "kids’ dishes."  Full bar service is available, and a continually rotating number of craft (and other) beers are on draft from a total of 25 taps. 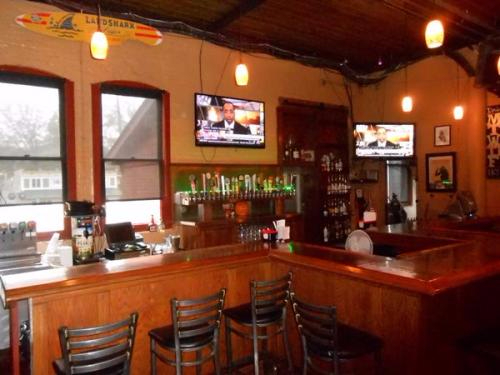 Service was prompt and professional without being obtrusive. During our visit John led off with ordering a Breakfast pizza, which was basically a dry (no sauce) pizza base topped with scrambled eggs, American cheese and a variety of toppings of his choice (including jalapeño peppers), which he pronounced to be absolutely delightful. Bruce went for the same, but without the peppers, and was equally happy with his meal.  Rod elected an Italian hoagie, and was completely pleased with it.  Don got a Caesar Mahi Mahi salad, and noted that while the fish was just fine, he didn't particularly care for the sauce used on it.  Both Mike and George ordered the fish sandwich, but Mike somehow had better luck with his, which he found eminently satisfactory. However, George, seemingly the ever-cursed curmudgeon, found his portion to be simply a heavily breaded slab of something which only might have once been some sort of fish. He deemed it to be unacceptable, sent it back—and ended up drinking IPAs for his lunch, which eventually made him just as happy as his more fortunate (or perhaps more tolerant) companions. 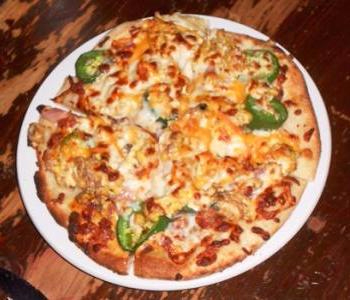