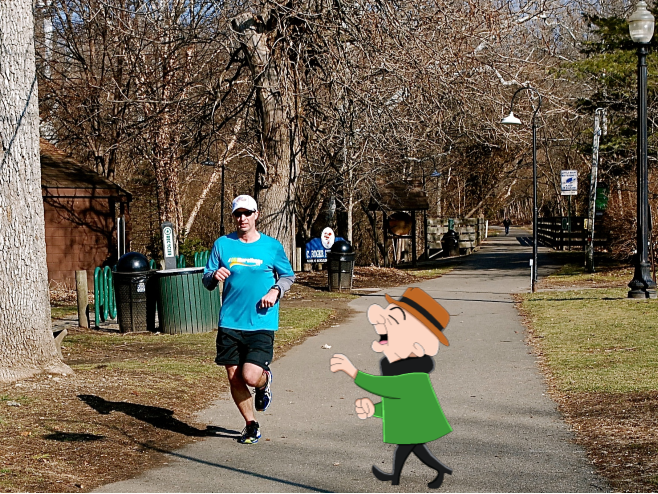 After careful observation while walking, running, bicycling and roller skiing on the Little Miami Scenic Trail over the last several years, I have come to the realization that one of the most serious safety threats for trail users is one memorialized in an award-winning cartoon of the 1950s and 1960s. That cartoon is none other than Mr. Magoo.

Mr. Magoo’s poor eyesight led him on a series of adventures in which he avoided repeated imminent catastrophes only through “blind luck.” For example, in “When Magoo Flew,” he mistook the international airport for the theater, where he planned to see a movie, and ended up boarding a flight. Once aboard, he interpreted “Emergency Exit Only” as “Elevator to Lobby” and ended up walking on the wing of the flying aircraft. He somehow, through no effort of his own, ended up back inside the plane and helped bust a criminal.

Have you seen Mr. Magoo on the trail? He’s the one who doesn’t understand and follow trail etiquette. He’s the one focused completely on himself without regard to other trail users. He’s the one who is blind to what is happening around him. He’s the one who behaves most unpredictably.
In Mr. Magoo’s world, there’s humor in close calls. With the Mr. Magoos we meet along the trail, close calls can easily become unfortunate incidents. While in cartoons, the laws of physics are suspended, in our world, these laws apply and are unforgiving.

There’s only one thing to do. When using the trail, keep your eyes wide open for Mr. Magoo. When you encounter him, enter defensive mode. Slow down, announce your presence and be prepared for the unexpected. When it comes to being safe on the trail, it takes more than blind luck.