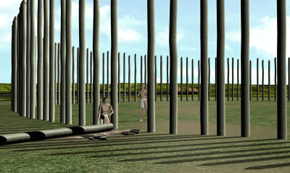 Did you know that what’s now the Little Miami State Park has been inhabited for over 10,000 years, and that artifacts have been found on the plateau that occupies the Ft. Ancient earthworks that date to 5000 BC, five millennia before the Hopewell culture built the earthworks there? Although little is known about the cultures that date to that time, quite a bit is known about the Native American cultures that thrived along the trail from 500 BC to the Indian removal a couple of hundred years ago. These native cultures cleared areas for cultivating crops, built monuments, made pottery and projectile points, and created ornaments from the shells and mussels taken from the Little Miami River. Although these cultures encompassed a large geographic area in Ohio and surrounding states, you can see a great deal of evidence of them as you traverse the trail from Newtown to Morrow.

The first Native American culture to inhabit the area was the Adena Tradition that was established as early as 500 B.C. and lasted until AD 100. Evidence of this culture can be found just a couple of blocks from the trail in the Flagg Spring Cemetery on Round Bottom Road in Newtown. Two Adena mounds are located in this cemetery, one of which stands about 12 feet high with an elliptical base of approximately 90 by 110 feet.

The Adena Tradition was followed and overlapped by the Hopewell Tradition which lasted from 200 BC to AD 500. They created a number of earthworks along or near the trail. One of these, the Stubbs Earthworks, was built in the vicinity of the Stubbs Mill Road crossing and the Morrow-Cozaddale Road crossing. These earthworks consisted of a fused rectangular and semi-circular enclosure covering over fifty acres! Most of these works have been destroyed by plowing and gravel mining but there is a visible remnant of the Stubbs Earthworks, a half-acre mound, located within a loop driveway running from Morrow-Cozaddale Road to the Little Miami schools entrance. To see this mound, take Morrow-Cozaddale Road (that’s the crossing just above Stubbs Mill Road) south about one thousand feet to the high school. Near this mound, at the present site of the high school’s grandstands, a team from the Cincinnati Museum Center discovered post molds from a giant 271-foot diameter Woodhenge, the first large timber construction of its kind known from the Hopewell era. 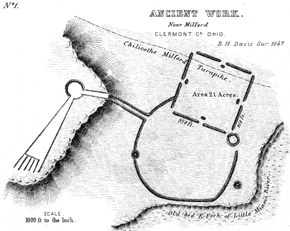 The most famous of the Hopewell Tradition earthworks are, of course, the Fort Ancient earthworks located on a promontory 275 feet above the trail just south of the State Route 350 crossing. These earthworks consist of an embankment 4 feet to 23 feet high and surround 125 acres within which are found numerous mounds.  Parts of these same earthworks were occupied much later by another native culture, the Fort Ancient culture.

Other Hopewell earthworks near the trail include the Milford Works located at Milford. These works, all but gone, once comprised one of the most extensive geometric complexes anywhere in the Ohio Valley region. And yet another Hopewell earthwork is the Fosters Earthworks, still intact but located on private land. You can see the hilltop on which these earthworks lie by looking across the river from the tavern’s parking lot at Foster’s Crossing.

From AD 1000 to AD 1650 the Fort Ancient culture inhabited the banks of the Little Miami River. They constructed burial mounds near their villages until about AD 1300 and thereafter buried their dead in cemeteries. One such site is located at the west end of Mariemont’s Little Miami Bluff Drive that can be found near the start of the trail in Newtown. Go west on Route 50 near the Newtown Road bridge and turn left at Miami Run to Miami Bluff Drive.  A historical plaque marks the site, called the Madisonville Site, from which archaeologists continue to extract artifacts.

The last of the Native American Cultures to inhabit the Little Miami valley were the Miami and Shawnee Indian tribes. These cultures have a rich and glorious history throughout Ohio and Indiana and together made a valiant stand against the encroachment of the Europeans under the great leadership of the Miami chief, Little Turtle and the Shawnee chief, Tecumseh. A Miami Village was located somewhere in the Little Miami watershed as early as the end of the 17th century, most likely some 5 miles from the river’s mouth, and the most prominent Shawnee settlement was in present day Old Town, near Yellow Springs. Unfortunately, no Shawnee Indian or Miami Indian settlements are known to have existed within the confines of the Little Miami State Park.