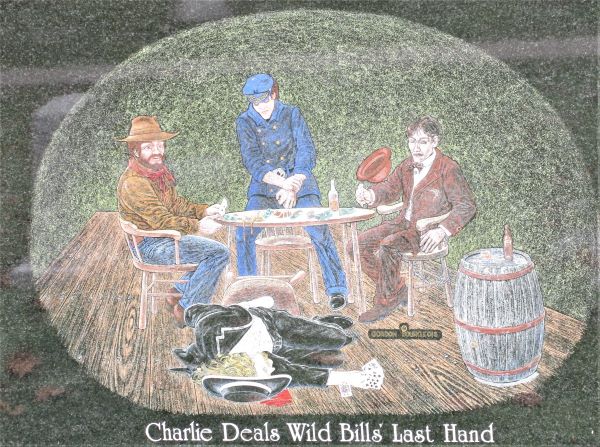 During my rides on the trail I’ll sometimes meander off the beaten path, curious about what stories might be found down a crossroad. Here’s a recent discovery.

In 1876 James Butler “Wild Bill” Hickok was playing poker in a saloon in the Dakota Territory after returning from his honeymoon in Cincinnati. According to legend he had just been dealt two black aces and two black eights (with a jack down) when Jack McCall, who Hickok had recently outplayed at the same table, walked in and shot Hickok dead. Since then, black aces and eights have been known as the Dead Man’s Hand. 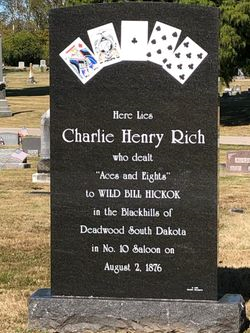 he dealer in that game was a young man from Loveland, Charlie Henry Rich. It is not clear whether Hickok and Rich were trying to make their fortunes at the poker table or in the surrounding Black Hills gold rush, but Rich eventually returned to Ohio where he married and raised a family.

Charlie Rich is buried in Miamiville’s Evergreen Cemetery just a few hundred yards from where Center Street crosses the trail near mile marker 47. There, his family has celebrated the aces and eights legend with a historical marker along with an elaborate tombstone over Rich’s grave, inscribed on the back with the fanciful scene of the shooting shown above.

Historian Marshall Trimble frames the story differently: “During the chaos after the shooting, the cards were scattered. The aces and eights story did not surface until Frank J. Wilstach published it in his 1926 book, Wild Bill Hickok: The Prince of Pistoleers. I don’t think we will ever know what hand Hickok was holding.”

But it could have been black aces and eights. 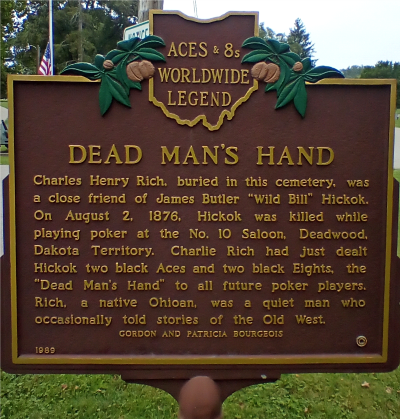 Phillip Obermiller is a trail sentinel for the Friends of the Little Miami State Park.