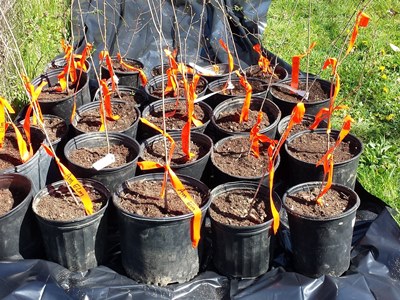 Our park wouldn’t be what it is without volunteers getting down and dirty!  Recently, nine of them descended on 200 empty plastic containers and 200 baby trees & shrubs in Rick Forrester's backyard to pot them up until they can be planted along the trail later in the fall.

Once the trees are planted, they will be registered with the Taking Root initiative, whose goal is to plant 2 million trees in the Tri-state area by 2020.

The trees and shrubs were purchased from the Warren County Soil and Water Conservation District with generous support from several sources this year.  Brent Devitt of “Trecycle” provided an incredible $200 for purchase of the trees and shrubs. Brent and Trecycle raise awareness and support for native tree reforestation in response to the loss of millions ash trees due to the Emerald Ash Borer in Ohio.

Don Hahn provided an additional $50 in generous support for trees/shrubs, and the remainder, $118, was provided by the Friends of the Little Miami State Park. 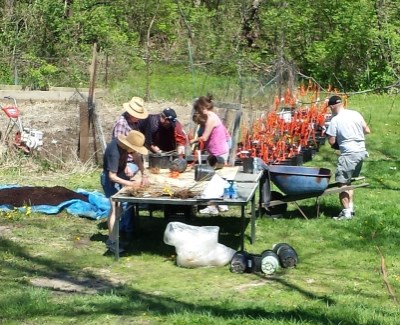 The young native Ohio trees and shrubs were purchased from the Warren County Soil & Water Conservation District during their annual seedling sale.  The following species were selected to target the various habitats along the river, and to replace trees which are being lost and non-native honeysuckle which is being removed: 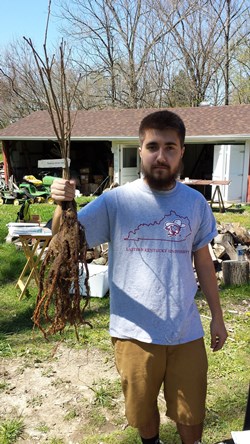 Setting up a “production line”, the team worked solidly for 2 hours in the sun and then took a half hour break to rehydrate and enjoy refreshments provided by Amy.  Everyone was back at it for another 1.5 hours, and, in total, the team logged over 29 volunteer hours of great work! 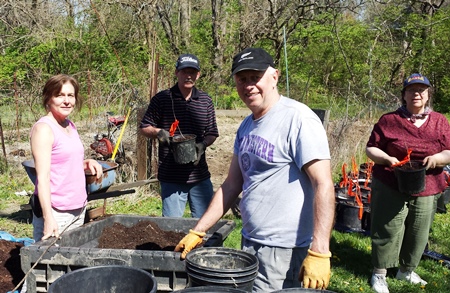 Rick will nurture (water, fertilize, de-weed) the trees during the hot summer so that survival rates will be high during this critical phase in the plants’ lives. Like last year, there will be multiple sessions in September & October to mark where trees will be planted in various sections along the trail, and then planting will occur over several sessions once the trees go dormant in late October/early November.  Currently, there are several sections of the trail identified for restoration at this time:  south of Loveland, near the Lebanon spur, south of Morrow, etc. If you know of additional areas, please contact the Friends Restoration/Reforestation group.

It doesn’t get much better than this for friends helping to restore the native Ohio forests and improve the diversity of the Little Miami State Park ecosystem!

- Rick Forrester for the Restoration/Reforestation Group