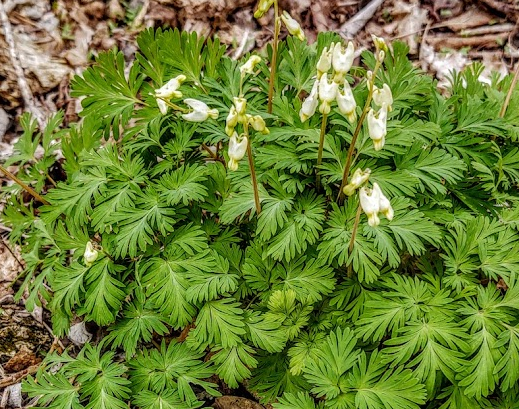 Blooming right now in the Little Miami State Park are two flowers that are lookalike cousins.

Dutchman’s Breeches (Decentra cucullaria) is an herbaceous perennial that grows with lacy fern-like leaves, usually in a small clump or mound. The flowers emerge on a stalk and look like a pair of pantaloons hanging upside down with a whitish yellow waistband underneath. The photo above was taken on the trail near Foster. 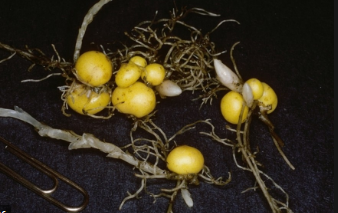 But wait! Dutchman’s Breeches has a doppelgänger called Squirrel Corn (Dicentra canadensis). It too has fern-like leaves growing with stalks of upside-down pantaloons, but there is a subtle difference. Squirrel Corn’s flowers are more heart shaped and do not have the yellow waistband. If you were able to see the roots (please don’t dig them up, see this photo instead!), you would discover where the plant gets its name. Bulblets attach to the roots like small kernels of corn. Dutchman’s Breeches do not have these yellow bulblets.

Both these plants are native to Ohio, and they usually grow in rich soil in dappled shady areas. Both are considered toxic as they contain the neurotoxin isoquinoline and should not be ingested. Dutchman’s Breeches is also called Little Blue Staggers, as it can induce drunken staggering in cattle when the plants are eaten. 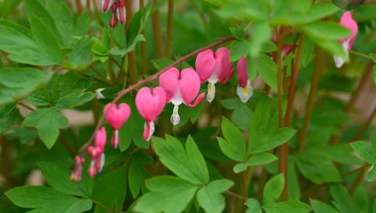 Don’t be confused by Bleeding Hearts (Dicentra spectrabilis) which look like a red version of Squirrel Corn! Bleeding Hearts are native but have also been heavily hybridized for use as garden/horticultural plants. They have robust leaves and eye-catching color.

But nothing compares to the delicate subtle beauty of carpets of wild Dicentra blanketing the woods along the bike trail. Look for them next time you are out – and see if you can spot these Doppelgängers.