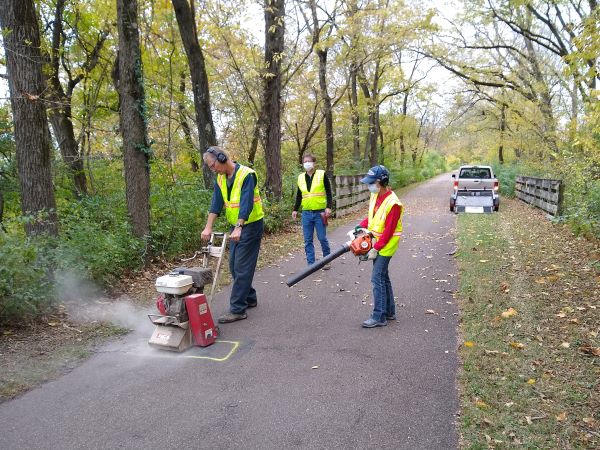 Our trail is now safer and smoother after a team of FLMSP volunteers logged a total of 150 hours completing a major trail bump remediation project last month. 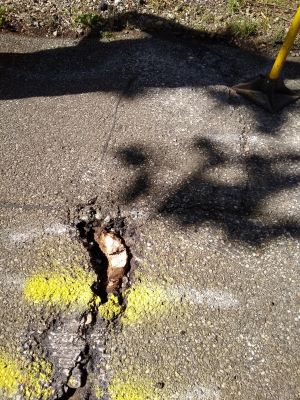 Bumps were marked and then ground down using a rented scarifier, and large cracks were filled with cold patch.

Tree roots pushing up under the trail surface are a major cause of bumps on the trail (see photo at left), and FLMSP has been addressing this “root” cause of the trouble by removing trees very near the trail and by cutting roots along the side of the trail. Bumps were first ground down in 2012/2013, with 333 bumps scarified; 280 were ground down in 2015, and 144 in 2017. This year’s project scarified 147 bumps, some new and some addressed in past years.

The importance of this project is emphasized by the two cyclists who were injured in September when they hit a trail bump, lost control, and went down. Because of the hard work of our volunteer team, accidents like this will be less likely. Thanks go to Don Hahn, who has served many years as the FLMSP Bump Grinding leader, and his team: Tammi Harper, Jeri Groves, Grant Gilbert, Ellen Hall, Corey Kenneally, Bruce Cortright, Dan Berling, John Telintelo, Tom McCray, Doug Welsh, Corey Kenneally, Steve Hobart, and Larry Marchand.

Below: Bump before and after scarifying and filling, mile marker 36.5 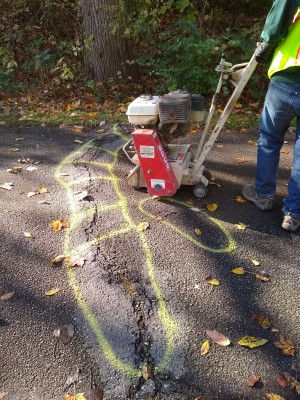