Lebanon, Ohio – City of South Lebanon and Hamilton Township, Warren County, Ohio – The Little Miami Scenic Trail, approximately 1,000 ft in each direction of the Grandin Road intersection, will be closed to bike traffic and pedestrians beginning Monday, May 9th, 2022, for the duration of the 2022 construction season in connection with the King Avenue Bridge Replacement Improvements Project. The trail closure is needed to allow for safe construction of the new King Avenue bridge over the Little Miami River, the bridge carrying Grandin Road over the trail, new trail parking lot, and the trail relocation. If there are safe opportunities to temporarily reopen the trail at times during this period, access maybe provided with the use of gravel and temporary fencing, this temporary access would only be for pedestrians or walking with a bike through the construction zone. Access from the trail to the Peter’s Cartridge Factory and to Cartridge Brewing will be maintained at all times from the southwest.

The trail closure will have advance warning signs for the bikers and pedestrians placed at the nearest trailhead locations.

The Warren County Engineer’s Office understands that the closure of the trail at this location is an inconvenience to the public, however it is necessary to safely construct the project improvements. Your cooperation during this project is greatly appreciated.

For more information, visit http://www.wceo.us or contact WCEO at (513) 695-3301. Please continue to check our website for project updates. 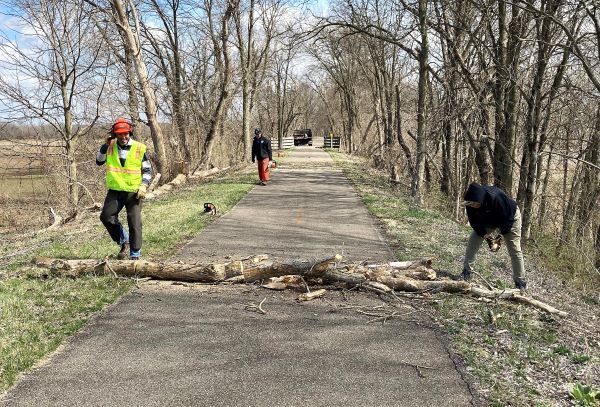 ODNR has been busy last year and early this year with significant maintenance projects to improve the trail. The projects included dead tree felling, culvert clearing, and cutback of over-growth restricting clearance on the trail.

There were two efforts launched last year to “clear the canopy.” This activity cuts back overhead and trailside branches and limbs to not only ease passage for typical trail users but also to provide clearance for maintenance and emergency vehicles. These efforts were assisted and supported by several volunteers from The Friends group. ODNR also enlisted the help and support of local townships and ODOT, who brought in their large articulated-arm brush hogging equipment for additional canopy and trailside clearing.

An estimated 200+ dead trees were cut down over a period from late last year into this year. ODNR fired up their chain saws and cut the dead trees down. Volunteers assisted by trimming away branches and helping move the logs and debris off the trail and berm. ODNR also brought along a chipper to help reduce some of the branches from the felled trees and other large brush piles along the trail. 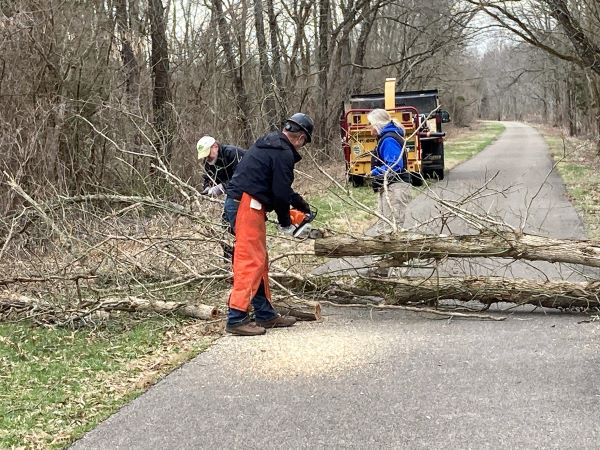 In another effort, ODNR brought in a small excavator to clear and dig out several clogged or partially clogged culverts. This is a time-consuming effort as the excavated material needs to be hauled away to a remote site. This critical task keeps the culverts from backing up and flooding the trail with mud and debris during storms. 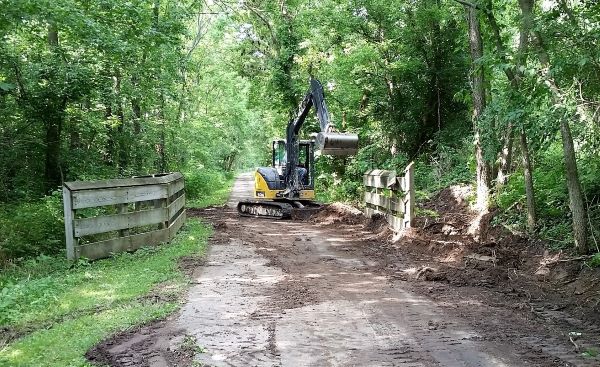 Unfortunately, none of these efforts are one-and-done activities. Mother Nature wants our trail back, and maintaining control to help ensure a safe and enjoyable trail is an ongoing battle.

Many thanks to ODNR and their workers along with the volunteers who supported these activities. 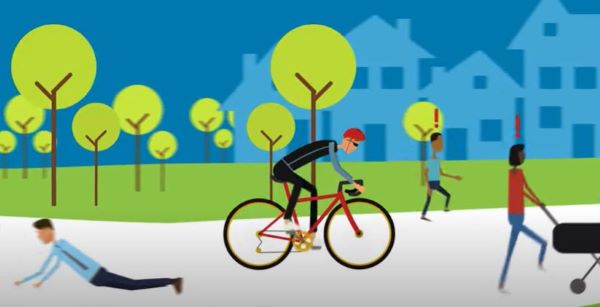 The Rails-to-Trails conservancy (RTC) serves as the national voice for the rail-to-trail movement and works to bring the power of trails to communities across the country. RTC’s mission includes “reimagining public spaces to create safe ways for everyone to walk, bike and be active outdoors.”
RTC has published a series of short, humorous videos to emphasize the power of trail sharing under the byline “Be nice. Trails are for Everyone.” These videos, which can be accessed here, provide the following tips:

The last tip recognizes the fact that rules vary from trail to trail. Among specific rules (available here) for the Little Miami State Park are the following:
1. Obey the speed limit of 20mph.
2. Call out “on your left” when passing.
3. Walk your pet on a leash no longer than six feet and maintain control of your pet at all times.
4. Do not wear headphones or earphones while cycling.

RTC’s tips provide some useful, specific guidance for using and sharing the trail safely. These six rules and a variety of others can be summed up in just two words—be nice!