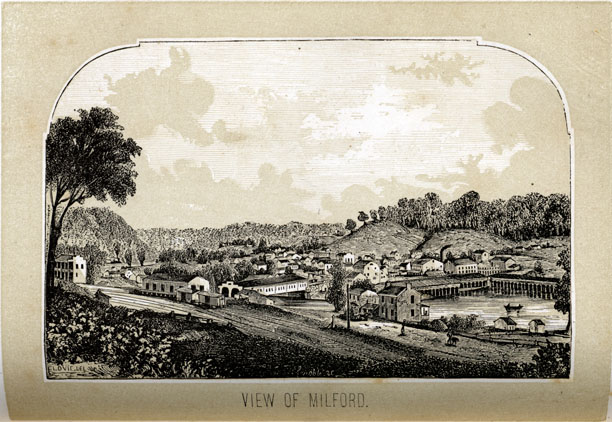 Imagine you’re cycling north on the trail from Cincinnati. Gradually you realize you are no longer pedaling, and you begin to hear a chugging engine instead of birds. A few other passengers in strange dress appear around you. You’re traveling on the Little Miami Railroad, and the year is 1854.

“Milford, on the right, is 14 miles from Cincinnati, and on the other side of the Little Miami. The village contains probably 600 inhabitants.” A man in the seat next to you is reading from a printed guide. You lean closer to look at the picture on the open page.

“The spires of its churches and schools, are conspicuous in the scene. The great mill, and long row of sheds to the right, are Kugler's Mills and Distillery: the sheds are for hogs, which are fed from the refuse of the distillery. Just in front, is the bridge which connects the Depot with Milford, and over which passes a turnpike road to the country beyond. There are three or four stages and omnibuses waiting here to convey passengers to the interior.”

It’s been a while since there were stages in Milford. But the turnpike is still here—today’s State Route 28. Before there was a bridge, you had to cross the river at the ford, the shallow area still present just north of today’s bridge that gave the town its name. The “Mill Ford” was the first safe place to cross the Little Miami north of the Ohio River.

The village’s original name, however, was Hageman’s Mills, named for John Hageman, one of the first permanent settlers in the area. The grist mill he erected in 1803 signaled the beginning of a community whose growth was tied to water power.
By 1811 John Hageman had moved to Indiana, and the name Milford was in common use. A more lasting mill, first erected in 1815, was bought and improved by Mathias Kugler in 1828. His son and partner, John Kugler, greatly expanded the operation whose buildings are described in our 1854 Railroad Guide.

The Kuglers were more than distillers; they were also influential in the development of the railroad. After the Little Miami Railroad was chartered by the state of Ohio in 1835 to build a line between Cincinnati and Springfield, Mathias Kugler agreed to purchase $10,000.00 worth of stock if the railroad would run within 80 rods (1,320 feet) of his mills. At the organizational meeting of the stockholders Kugler was elected director. But it was 1841 before the railroad reached Milford, due to a country-wide depression. By 1842 the railroad was bankrupt, but John Kugler came to its rescue when he succeeded his father as director, and by 1846 the tracks ran all the way to Springfield.

The first bridge at Mill Street (Rte. 28), completed by 1818, was a wooden toll bridge, and each traveler was charged five cents per round trip. Because the bridge was covered, it was sometimes known as a “kissing” bridge. In 1894 the wooden bridge was replaced, and the new bridge was known as the “iron bridge,” although it was made of steel. It was upgraded again in 1925 by another steel bridge, an occasion marked by speeches, parades, a dance and fireworks. That bridge was removed in 1992, having been declared unsafe years earlier and replaced with today’s concrete bridge. 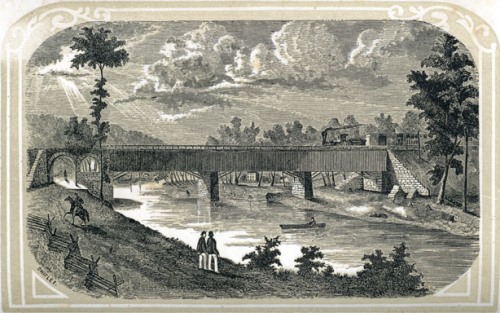 The railroad crossed the river farther north at Miamiville, the location of our present trail bridge, where the Little Miami swings briefly to the west. This illustration from our 1854 guide shows a train crossing the bridge, described as “a substantial structure, constructed for a double track and above high water.” In 1863, Confederate General John Hunt Morgan and his raiders captured and destroyed a supply train near here, but soldiers in training at Camp Dennison helped defend the Little Miami Railroad and Cincinnati and stopped Morgan's men from destroying this strategic bridge.

Oh! We’re pedaling again. The rails become an asphalt trail as the train whistle fades into distant time. But as we travel the countryside here north of Milford, we hear the words of our 1854 guide: “The gentle swell of hills, the quiet repose of farm houses, and the intermingling of native woods with cultivation, are the principal features of Ohio scenery in this part of the State. The sublime and rugged are not here; but the gentle and graceful predominate.”