Just north of the bridge at mile marker 41 on the trail is a red-brick 19th century farmhouse, once the home of Nancy Ford Cones. Cones pioneered the role of women in photography while living and making images at Road’s End, her homeplace alongside the Little Miami River. “It is a dead sure thing,” she once wrote, “that if you cannot make pictures in and around home, it is positively hopeless to go abroad to find them.”

She wasn’t much appreciated by the other members of the Loveland Women’s Art Club who chided her for “attempting art” with her camera. Yet her photographs were shown in art galleries in San Francisco, Boston, and London, and she took second place in a national photographic competition after Eduard Steichen and ahead of Alfred Stieglitz. Eastman Kodak and Bausch & Lomb paid royalties for the use of her images in their national advertising. Her professional oeuvre includes 15,000 glass photographic plates and 3,000 gum prints. 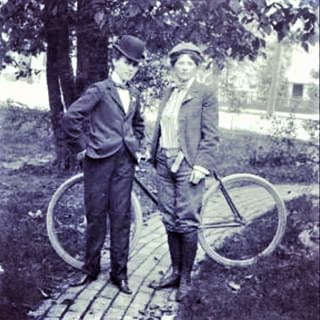 Cones was a leader not only in photography’s Pictorialist Movement but in another way as well. Both Susan B. Anthony and Elizabeth Cady Stanton are credited with declaring that "woman is riding to suffrage on the bicycle" because early women cyclists opted for practical pants and/or leggings over the voluminous and “more modest” fashion of the day. The 19th amendment was passed when Cones was 51 but she had been bicycling unencumbered by a long skirt or dress well before that, embodying on two wheels the independent spirit shown in her photography.

Cones died in 1962 before a section of the Little Miami Railroad became the Little Miami State Park. Nevertheless, she would likely be pleased to know that a popular bike trail now crosses her former front yard - and that hardly any of the riders are wearing skirts or long dresses.

(Phillip Obermiller is a member of the Friends of the Little Miami State Park and has a Nancy Ford Cones print in his den.)