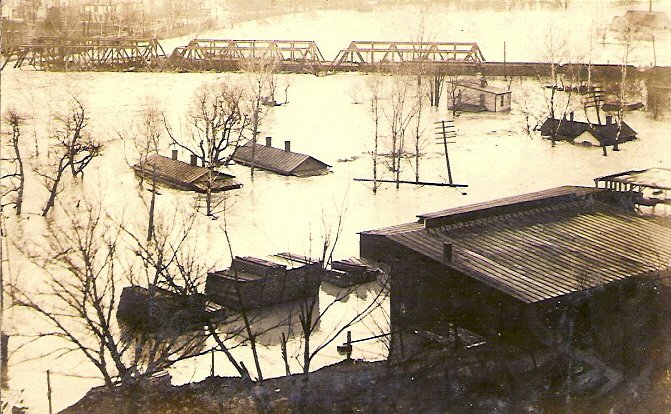 Trail volunteers seem to fight a never-ending battle of keeping the trail free of conditions that cause flooding on parts of the trail—clogged culverts, erosion caused by bridge embankments, and other obstacles that interrupt the flow of water away from the trail surface. We worry about a few inches of water covering small sections of the trail because even a few inches can cause permanent damage. Can you imagine a flooding situation that would cause most of the Little Miami State Park to be covered with 10 to 20 feet of water? It happened, in March of 1913.

The winter snows had melted, the frozen ground had thawed, and the ground was saturated with water. And then conditions for a “perfect flood” throughout Ohio came together. The rains began to fall in the Little Miami River Valley on Sunday afternoon, March 23 and by Monday a total of 2.4 inches had fallen. The following day another 2.54 inches fell, and another 2.07 inches fell the day after that.  Over a five-day period, total rainfall was 7.53 inches. Today this may not seem like a serious amount, but with no dams or levees to protect the valley and with the ground’s inability to absorb or impede the flow of water, the consequences were disastrous. Total rainfall in the valley was 17.5 million cubic feet per square mile and it had nowhere to go.

In Oregonia, the Weather Bureau river gauge showed 7 feet on the 24th, and a whopping 21.1 feet at 11:00 p.m. on the 25th. Now picture yourself on the bike trail in downtown Morrow with a water depth of 10 feet in all directions. Better to be pedaling a pedal boat instead of a bicycle.  Believe it or not, Morrow fared better than most towns along what’s now the bike path. The current was not strong in Morrow and the buildings were not seriously damaged, but of course ten feet of water in someone’s house is a horrible thought. Can you imagine that farther down the trail in South Lebanon conditions were much worse? Here, the water was fully 25 feet deep in some of the business streets. Practically the entire settled portion of the town was under water. To make matters worse, the current was swift here and many houses were totally wrecked by the strong current.

At Kings Mills, the river was only 3.3 feet on the morning of the 24th but by the morning of the 26th the river was at 33.7 feet. The town of Kings Mills is located high on a bluff above the river, but Peter’s Cartridge Factory is located beside the river and the factory experienced extensive damage. Farther down the river at Loveland, the entire business district was flooded to a depth of 5 to 10 feet, and 25 percent of the residential area was affected by the floodwaters.

The flooding was not exclusive to the Little Miami Valley. Flooding in the Great Miami River Valley was just as severe and property damage much worse due to the higher population density along the Great Miami River where large cities such as Dayton, Middletown, and Hamilton are located. We may never experience another flood like this one with levees and dams now in place. But history certainly reminds us of what could happen, as the surroundings of our lovely bike trail have witnessed many historic events, good as well as calamitous. 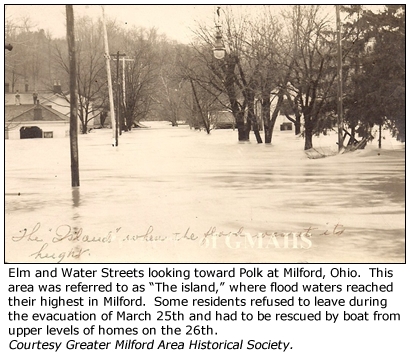